Free Delivery on orders over €89

Free Delivery on orders over €89
€5 OFF ANY ORDER
Join our newsletter >>>
Hello:  Signup | Login
On Sale

Availability: Out of Stock
Delivery Time: 2-4 Days
Request a callback on this product
InformationData SheetDeliveryReturns
Information

Dosage for cattle:1 ml per 25 kg of bodyweight.

Always read the label and all enclosed information for Closamectin before administering to animals!

The dangers of having infected cattle:

Liver Fluke:Beef cattle infected with liver fluke can suffer from weight gain reductions of between 0.5 - 1.6 kg per week. This makes the prevention of liver fluke a very high priority to the farmer.

External Parasites: Another factor that can negatively effect cattles' performance is ectoparasites. Cattle infected with lice will become irritated, which can cause a loss of appetite. Studies have shown that infected cattles' food intake can reduce by up to 20%

It is recommended that treating beef cattle at least twice a year is the most effective way of controlling the fluke problem on your farm.

Housing: Cattle should be treated at the time of housing or just after housing. A second treatment may be needed to treat fluke if the cattle are housed early or if the area is highly susceptible to contamination.

Outwintering: For cattle who are outwintered a treatment should be given in the late autumn to early winter. A second treatment may be needed in January/February.

Bought in Cattle: All bought in livestock should be treated and quarantined for at least 48 hours. This will help protect your herd from infections introduced from new cattle.

Further Information:
Ivermectin belongs to the avermectin [3-AV] class of
anthelmintics in the endectocides. Chemical group of
anthelmintic endectocides [3-AV]. Closantel is a member of
the salicylanilide class of anthelmintics.
Further information for the treatment programmes for
mixed infestations consisting of nematodes and/or
ectoparasite concurrent with fluke.
The timing for treatment should be based on
epidemiological factors and should be customised for each
individual farm. As with other anthelmintics, veterinary
advice should be sought on appropriate dosing programme
and stock management to achieve adequate parasite control
and reduce the likelihood of resistance developing.
Care should be taken to avoid the following practices
because they increase the risk of development of resistance
and could ultimately result in ineffective therapy:
􀀀 Too frequent and repeated use of anthelmintics from the
same class, over an extended period of time.
􀀀 Underdosing which may be due to underestimation of
bodyweight, misadministration of the product, or lack of
calibration of the dosing device.
Suspected clinical cases of resistance to anthelmintics
should be further investigated using appropriate tests (e.g.
Faecal Egg Count Reduction Test). Where the results of the
tests strongly suggest resistance to a particular anthelmintic,
an anthelmintic belonging to another pharmacological class
and having a different mode of action should be used.
Resistance to ivermectin has been reported in Cooperia spp
in cattle. Therefore the use of this product should be based
on local epidemiological information about the susceptibility
of the Cooperia spp and recommendations on how to limit
further selection for resistance to anthelmintics.
Patent No: EP1478327B
VM No: 02000/4254
For Animal Treatment Only
Keep out of reach and sight of Children 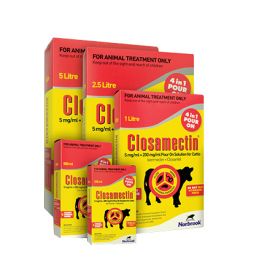 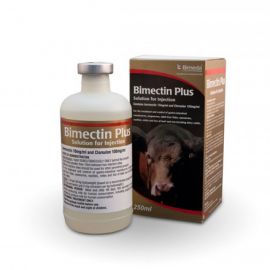 On SaleMORE INFO
Bimectin Plus Injection (Ivermectin, Clorsulan)
From
€79.00
€79.00
Was €~~productWasPrice~~
€5 OFF ANY ORDER
Join our newsletter
Latest from our Blog