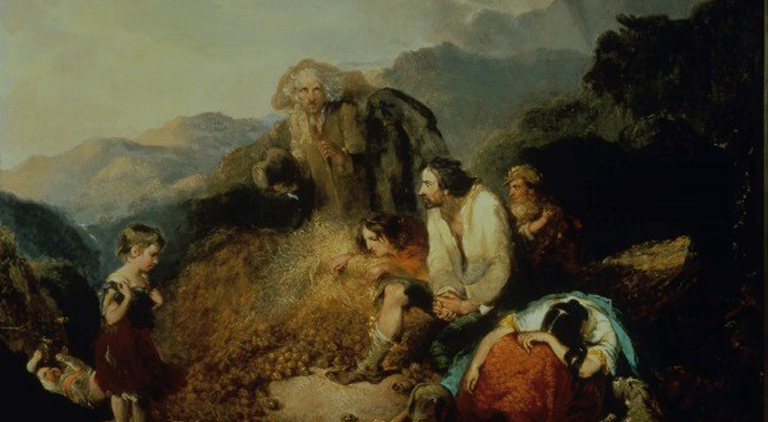 Have Irish farmers failed to learn from mistakes that lead to the famine?
14/11/2019

I still work our small family farm in Leitrim with my father, mainly at the weekends. Our farm is on the slopes of the mountain and we have rights to a section of commonage. Locally our section is known as “Jacks Mountain”. A few weeks ago we were bringing down some hoggets from the mountain, when I stumbled across some stones. On closer inspection I realised the stones were part of a ruined wall.Upon quizzing my father as to the purpose of walls so high up on a boggy tract of mountain, I was informed that they were the remains of a house; Jacks House! I looked around in amazement at the rough heather terrain and asked why anyone would live here, so high up on such poor ground? The oul lad was pretty sure that old Jack was probably a victim of eviction from lower down during the famine years. “Probably moved up here as the only place he could afford or would be let live!”

This revelation made sense. As an area of poor ground Jack would probably be charged minimal rent. In fact as it was possibly commonage ground even then, he might have had it rent free. Building up there must have been hard work!  To get to the house he would have had to climb a long hard mountain road before trekking a mile or two through bog and heather! Every time he went to a shop or even visit his nearest neighbour!
It seems mad now. Yet you could still make out the area near the house where he had been growing his own crops. Apparently you can grow potatoes, cabbage and other vegetables on bog ground! This revelation made me want to re-examine my knowledge of the famine. What I discovered raised questions about where Irish farmers are going at the minute.

Causes of the Famine

I always knew the famine was caused by an over reliance on potatoes as the mainstay of the populations diet. This coupled with “the English and their dirty landlord/ tenant system” of course! These are still the overriding factor! But there are also subtleties behind these and we should be taking note of and learn from them all.

At the same time that the population was growing, less and less land in the country was being dedicated to tillage… Ever increasing rents ensured a lack of capital and without even land security most tenants favored pasture farming over crops. Animals could be easily relocated and required little investment in the soil, and most of Ireland was well suited for cattle grazing. Unfortunately, the profits of pasture went into a very few pockets, and the increasing popularity of husbandry resulted in an ever-decreasing area of land for subsistence.

The above is an extract from a thesis on the “History and landscape of Irish village”. Surprisingly parts of it sound very familiar. Land is increasingly been rented, with much that is “owned” having even larger loan payments against it.  Profit from pasture going into a few pockets is something that is still making headlines, as is the “ever-decreasing” number of tillage and vegetables grown in this country. All these were contributing factors to the famine.

This, and the Conacre system, where labourers were given a small cottage and a tiny plot of land instead of payment led to disaster. With such little land available for the labourers family to live off they naturally turned to a crop that would produce the most food from a minimal area, the humble spud.

The high yield and resilience of potatoes made them the solution to growing demands for land and food, and the island’s acidic soil and damp, temperate climate was well suited for their growth. Cormac O’Grada (1999) quoted contemporary sources as giving an average yield of nearly six tons per acre at the dawn of the nineteenth century in Ireland.

A large amount of potatoes could be harvested from an acre or less. A lot more than any other crop available. It makes perfect sense to get the most out of all your ground. That is why Teagasc are always talking about profit per acre monitors after all! But as our ancestors discovered it comes with a huge risk!

Potatoes were so plentiful before the famine; they were almost worthless as a saleable item. The wealthy around Europe hardly ate any at the time, viewing it as a “poor man’s food”. But food it was, with many living almost exclusively on the crop. Meaning that when blight struck they were left with nothing to fall back on; no other options were available. That is why after the famine years and particularly after the republic was set up and the people started to own their own land, farmers set up mixed farms.

Almost all farmers had their own crops and vegetables mixed with livestock, cattle, sheep and pigs. This meant they would always have food for their own families at least and not be susceptible to any one enterprise leaving them destitute. They might not get rich but they would never again be made starve because of one crop failure.

Gradually we have forgotten this and again started to follow the money and, honestly, the easy way out. It’s easier to focus on one farm output than trying to juggle a few. When we joined the EU the farm payment schemes, the increased price of beef and the later milk quota’s enticed more and more farmers into suckler farming as a easier, less time consuming option.
But over time a decline in payments and prices led to a decline in the family farm; and any that were left had to become part time farmers. We are returning to the pre famine years where more and more land is owned by fewer and fewer people. These have to produce more and more product from this land to make a profit.

More farms are rented or mortgaged with many farmers becoming little more than poorly paid labourers who have to supplement incomes with work elsewhere. Farmers are fast returning to what was seen in this country in the lead up to the famine; a poor underclass working hard to survive. Meanwhile landlords taking high rents have been replaced by wealthy banks and beef barons reaping the benefits.

…this underclass was composed of vagrant agricultural laborers and sub-tenants who made informal and generally short leases with tenants who in turn rented directly from the landlord. They farmed small plots and sold crops and livestock to make rents, often starving through bad seasons and constantly owing property arrears. …they would work harvesting cash crops in exchange for small potato patches, or traveling abroad to labor in English and Scottish factories. These landless laborers and sub-tenants were the bottom tiers of Irish society and the great majority of the ‘people of Ireland’.

I’m not saying that farmers are in as bad a state as these labourers and sub tenants by any means. Clearly things aren’t that bad. However you have to admit the increasing similarities. We need to be very aware of the dangers that lie ahead if we keep on the road laid out for us at the moment. Never forget the plan for dairy expansion is the brainwave not of farmers, but of government with short term views on profit and tax, not farm interests.

Learning from the past

Monoculture farming has never been a good idea for farmers in the long term. It is always the wealthy who do better from farmers focusing solely on one type of farm system. It keeps the farmer reliant on one food source, one income stream. Farmers have no bargaining power as they have to take whatever is offered or available at the time of sale. Otherwise they will be left destitute.

On the other hand if they produce small amounts of various products they have other options to fall back on. Had our ancestors another crop to fall back on the famine may never have happened. At the minute farmers are rushing (and being pushed) headlong even deeper into this monoculture world! Dairy as we all know is the only way to feed a farming family at the minute, so everyone is turning to dairy. But we need to take heed of our history and learn the lessons from our ancestors’ mistakes.

While a disease that wipes out the dairy herd like blight did to the potato might seem unlikely, an oversupply crashing the market is an all too close reality. The beef crisis is a much closer and real example of what happens when farmers become too reliant on one type of farming. A surplus that should have been foreseen, but was ignored, has flipped the knife, knocking them off the edge. Jumping on to the dairy bandwagon is, at this stage, just exchanging knife edges. Instead of increasing herd numbers dairy men should be looking at growing some crops. Suckler farmers should be looking at vegetables or fruit trees.

Many will shout that their land isn’t suitable, that it can’t be done. That’s it’s too much work and not worth it. I say our ancestors were growing crops in every part of this country, even on boggy mountainsides! Before the invention of polytunnels and green houses! If you are afraid of hard work, get out of farming and find an office that will take you! Feeding yourself is the only thing worth working for! That’s another lesson we can learn from our ancestors. When old bachelor Jack O’ the mountain was evicted during the famine, he didn’t give up. He didn’t lie down and whinge about it. He found a way. I’m sure it was hard work. It must have been lonely, but he did what he needed to do to ensure his survival. He made a living for himself in the harshest of environments when so many around him struggled and left. He adapted! Irish farmers are going to have to do the same if they are to stay on their land. RGA References from The History and Landscape of a Nineteenth Century Irish Village by Daniel Pettit Junior

< Previous Post: Christmas Presents for the Farmer in your Life: 2> Next Post: BREXIT: Is the perfect Halloween story coming to an end?
Read Next