Free Delivery on orders over €89

Free Delivery on orders over €89
€5 OFF ANY ORDER
Join our newsletter >>>
Hello:  Signup | Login
On Sale 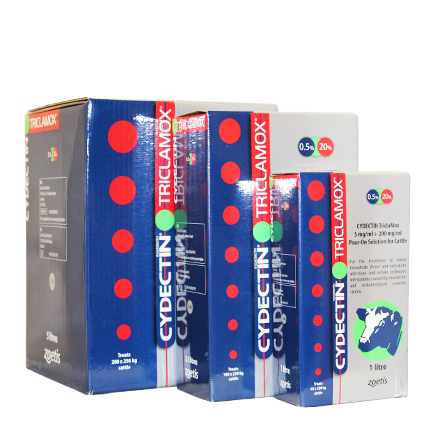 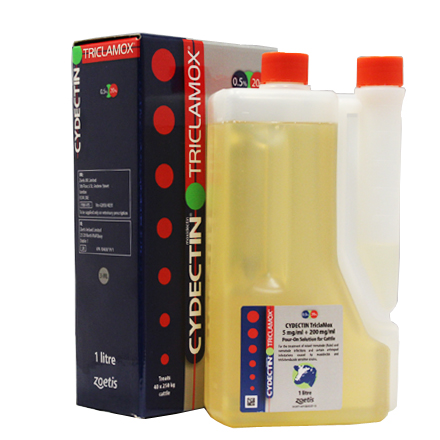 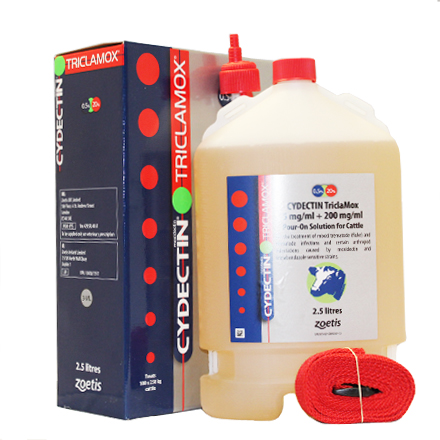 Cydectin Triclamox Pour-on is a broad spectrum flukicide and wormer for cattle. It is used for the treatment and control of gastro-intestinal worms, lungworms,  liver fluke and roundworms in beef cattle.

Withdrawal Time: 143 days for animals intended for meat and offal, not permitted for use on animals producing milk for human consumption.

Always read the label and all enclosed information for Cydectin Triclamoc Pour-On before administering to animals!

Objectives:To Evaluate the efficacy of Cydectin Triclamox Pour-on for Cattle against 4,6 and 8 week old immature and 12 week old adult stages of liver fluke (Fasciola Hepatica) in cattle compared to untreated controls and treatment with other commercially available products.

Method: 104 Holstein-Friesian calves were divided into groups and infected with liver fluke metacercariae on day 0. While one group remained untreated the other groups received either Cydectin Triclamox Pour-on, ivermectin plus closantel pour-on or ivermectin plus clorsulon injection as treatment.

4.2 Indications for use, specifying the target species
In cattle:
Treatment of mixed trematode (fluke) and nematode infections and certain arthropod infestations caused by
moxidectin and triclabendazole sensitive strains:
The product has a persistent effect in preventing re-infection by Ostertagia ostertagi and by Dictyocaulus viviparus for
5 weeks after a single dose.

4.4 Special warnings for each target species
Care should be taken to avoid the following practices because they increase the risk of development of resistance and
could ultimately result in ineffective therapy:
• Too frequent and repeated use of anthelmintics from the same class, over an extended period of time.
• Underdosing, which may be due to underestimation of body weight, misadministration of the product, or lack
of calibration of the dosing device (if any).
Suspected clinical cases of resistance to anthelmintics should be further investigated using appropriate tests (e.g. Faecal
Egg Count Reduction Test). Where the results of the test(s) strongly suggest resistance to a particular anthelmintic, an
anthelmintic belonging to another pharmacological class and having a different mode of action should be used.
In 2010, no confirmed resistance to moxidectin in cattle parasites has been reported in Europe, however, resistance to
other macrocyclic lactones (MLs) has been reported mainly in Cooperia oncophora in some European countries, and
resistance to moxidectin has been reported in the Southern Hemisphere. Resistance to other MLs in some strains of
Cooperia spp. can imply concurrent resistance to Moxidectin. Resistance to triclabendazole has been reported in
Fasciola hepatica in cattle in some European countries. Triclabendazole resistant F. hepatica hosted in sheep can be
transferred to cattle grazing the same pasture. Therefore the use of this product should be based on local (regional,
farm) epidemiological information about susceptibility of parasites, local history of treatments and recommendations
on how to limit further selection for resistance to anthelmintics.
This product should not be used for the treatment of single infections.
It has been shown that rainfall immediately before or within 2 hours after treatment will not affect the efficacy of the
product.

4.5 Special precautions for use
i. Special precautions for use in animals
This product has been formulated specifically for pour-on administration for cattle and must not be given by any other
route of administration or to any other species.
All animals in a group should be treated.
ii. Special precautions to be taken by the person administering the veterinary medicinal product to
animals
Wear gloves, protective work clothing and safety glasses when using the product
Do not smoke, drink or eat while handling the product.
Avoid direct contact with skin and eyes
Wash hands after use
If splashed in the eye or on the skin, wash with plenty of clean, running water immediately.
People with known hypersensitivity to the active substance should not handle the product. If irritation persists, seek
medical advice and show the label to the doctor.

4.7 Use during pregnancy, lactation or lay
The product is safe for use in pregnant and lactating animals.

4.8 Interaction with other medicinal products and other forms of interaction
None known.

4.9 Amounts to be administered and administration route
For external use only.
0.5 mg moxidectin/kg body weight and 20 mg triclabendazole/kg body weight (equivalent to 1 ml of solution for 10 kg)
and as a single topical application.
To be administered directly to the hair and skin along the midline of the back of the animal from the withers to the tail
head.
Apply to clean healthy skin.
To ensure administration of a correct dose, bodyweight should be determined as accurately as possible; accuracy of the
dosing device should be checked. If animals are to be treated collectively rather than individually, they should be
grouped according to their bodyweight and dosed accordingly, in order to avoid under- or overdosing.
Shake before use.
Directions for using the Squeeze-Pour System (500 ml and 1 litre bottles only) :
Step 1: Remove screw cap from dispensing chamber only. Remove foil seal.
Step 2: Gently squeeze the bottle to fill the measuring chamber with the required amount of liquid.
Step 3: Pour the measured volume of fluid from the chamber onto the animal as directed.
Repeat steps 2 and 3 for subsequent animals
Step 4: Reapply the screw cap to the dispensing chamber after use.
Directions for using a pour-on applicator (2.5 and 5 litre backpack):
Connect the pour-on applicator to the backpack as follows:
Attach the open end of the draw-off tubing to the cap with the stem.
Replace shipping cap with the cap that has the draw-off tubing. Tighten the draw-off cap.
Gently prime the pour-on applicator, checking for leaks.
Follow manufacturer’s directions for correct use and care of equipment.

4.10 Overdose (symptoms, emergency procedures, antidotes), if necessary
Signs of overdoses have not been seen at 5 times the recommended dose. However, if they do occur they should
be consistent with the mode of action of moxidectin and would be manifested as transient salivation, depression,
drowsiness and ataxia. Treatment is not generally necessary and recovery is generally complete within 24 to 48 hours.
There is no specific antidote.

5.1 Pharmacodynamic properties
Moxidectin is an endectocide active against a wide range of internal and external parasites and is a second generation
macrocyclic lactone of the milbemycin family. Its principal mode of action is interfering with neuromuscular
transmission of the GABA (gamma amino butyric acid)-gated or glutamate-gated chloride channels. Moxidectin
stimulates the release of GABA and increases its binding to the postsynaptic receptors, and binds to the glutamategated
chloride channels. The net effect is to open the chloride channels on the postsynaptic junction to allow the inflow
of chloride ions and induce an irreversible resting state. This results in flaccid paralysis and eventual death of parasites
exposed to the drug.
Triclabendazole is a flukicide belonging to the benzimidazole group of anthelmintics. It is well established that
benzimidazole anthelmintics selectively bind to -tubulin, thus causing the depolymerisation of microtubules and the
subsequent disruption of microtubule-based processes in helminths.

6.3 Shelf-life
Shelf-life of the veterinary medicinal product as packaged for sale: 2 years.
Shelf-life after first opening the immediate packaging: 6 months.

6.4 Special precautions for storage
Do not store above 25°C.
Protect from light.
Do not freeze.
If accidentally frozen, shake vigorously before use. 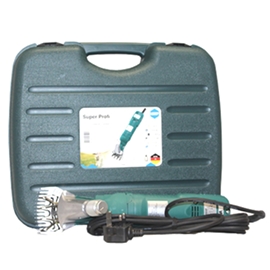 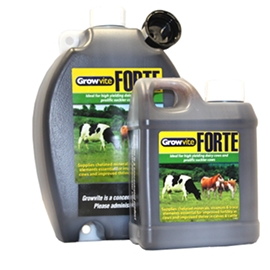 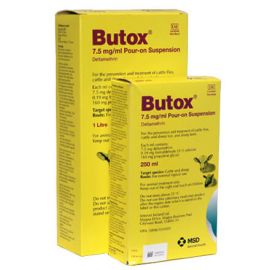 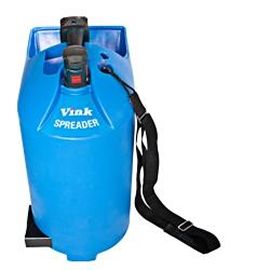