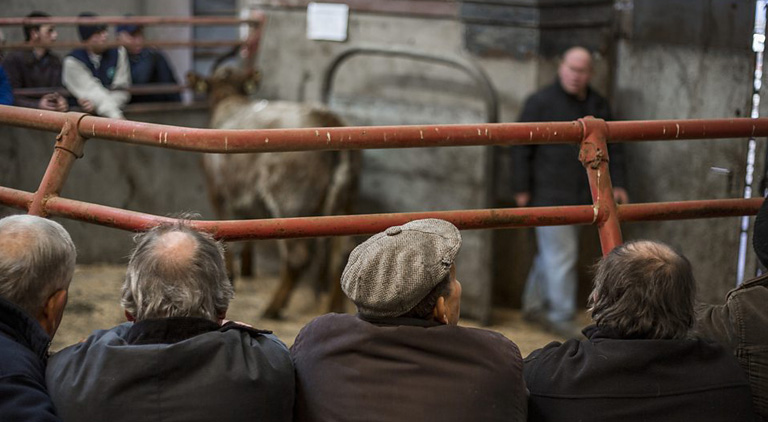 With marts around the country facing hardships of increased insurance costs and reduced prices,not to mention more farmers deciding to sell direct to factories in the hopes of getting the best price for their animals, the countries marts are in danger of complete decline. However here at Agridirect we think that marts still have a lot to offer. Whether it is the sense of community, the thrill of outbidding a rival or the craic and gossip over a good canteen dinner, the mart is a great place to be.  My favourite pastime as a young lad at the mart to was watching the different bidders in action. There was such a variation in bidding types I created a database to aid any newcomer decide what type of bidder they would like to be and to spot who was bidding against them.

The Rules of Mart Bidding

If you are a newcomer at the mart, you will need to know the types of bidders you’ll be coming up against. There will be several people bidding at the mart and this isn’t one of those fancy “get a numbered paddle and raise it in the air” type deals. Oh no, livestock marts in Ireland follow a whole different set of rules. Rule number one: there are no rules. There is no one set way of bidding, with bidders evolving their own way of putting in those all important bids over the years. If you wish to fit in you will need to understand the habitat you are entering and know the main players. If you can’t spot the bidders an unscrupulous auctioneer could take phantom bids against you to raise the price! Or worse.

My grandfather told a story of how when the first marts came in to replace the fair days, an older neighbour asked him to bring some cows to the mart for him. When the time came he wanted my grandfather to sell the cows for him as he didn't understand how it all worked. As the animals went around the ring the auctioneer looked around the ring, our neighbour nodded to let him know he was the owner and happy with the price. Thus, unaware of the nod bid tradition that was evolving he ended up buying all his own animals. So beware how you move your head around the mart ring in case you’re mistaken for a common type of bidder; the Header. To help you avoid such a problem I've created a list of the main types of bidder to help you spot those bidding against you.

The Bidders you’ll spot (or maybe not) at the Mart

The head is king to the Header bidders; they are all about the head movements.
You can find three distinct types;
the discreet Common Head bidder,
the very obvious Raving header bidder and
the hybrid Lazy head bidder.

But whichever you are up against there are few movements common to all. To place a bid these people will either throw their chin up in the air like a horse pulling against the bit or throw your forehead down like a bull warning you out of the field. Either movement can be straight, slightly to the side or even in a semi-circular movement.

The subtle Common bidders’ movement will be so small and quick it’ll be more of a twitch, you’ll need to have a quick eye to follow it.

The more obvious Raving header can go so big you may think they are having some sort of head seizure. A mad man shaking away invisible flies! Don’t be fooled, the bid has been placed.

The lazy header on the other hand takes a more laid back approach. A nice smooth head movement, taking the best of both worlds. They don’t give a flying excrement who knows they are bidding. They’re there for livestock and they’re going to get some no matter what.
The Header is one of the most common in marts around Ireland. There will be at least one in any mart at any given time.

This rare breed is very hard to spot. You will need to attend a few marts to train in your bidder spotting eye. These rarities appear to have evolved a telepathic connection to the auctioneer to the untrained eye. However when you look closely you will see that a bid is placed with an intense look that seem to drill holes in to the auctioneers brain to place the bid. These bidders have honed their bidding over years of work and are well known to the auctioneer. Be wary of going against these types or you may find yourself on the end of one of their intense stares. And this stare won’t be a bid; it will be a death stare full of daggers. Many a brave man has fallen to this stare, missing a few marts to recover. Luckily they are rare enough.

To the new comer at the mart with some lesser known Winker’s can appear to be a very flirtatious character. You may even begin to wonder if you’ve walked into some sort of underground club scene. (The sticks in hands might begin to take on new meanings in your head.) However you need not worry, this is merely the Winker placing their bid. You may also occasionally spot a winker/ header cross breed who will throw in an accompanying nod to his wink. They are quite rare in most parts but there is still some out there. They’re usually a cheeky bidder up for a bit of devilment. They lighten the atmosphere and don’t take things too seriously.

The chin scratcher can appear out of place in the mart. You could easily mistake these for a long lost accompaniment to Auguste Rodin’s “The Thinker”. The Chin scratcher will be leaning with chin in hand or arm, occasionally tapping or stroking their jaw line, deep in thought. The only thinking they’re doing is how much more they’re willing to spend on the animal they’re currently bidding on. They are a crafty breed, with incredible concentration.

This is a bidder to be wary of, as you never know what’s going on in their head. You’ll need to have your wits about you if you’re bidding against them. Note that it is down to this type of bidder that new comers are warned not to scratch their face when around the mart ring! (This type of bidder can also appear as a nose tapper, however these are an extremely rare breed, and debate rages on whether they are just a chin scratcher with an itchy nose)

Another rare breed, with many claiming that they too are another variation of the chin scratcher and don’t warrant their own sub category. However as their bid involves tugging rather that scratching I’ve given them their own space.

As the name suggests the Ear Tugger gives a light tug of the ear lobe to place their bid. This would appear to be an attempt at subtlety. But it is so clearly not subtle that we can’t be sure why they do it. These bidders are an anomaly and very difficult to understand. However they do have success at bidding so it does appear to be an effective bidding technique.

The waver comes in many forms. There is a one finger, a two finger; all the way up to the five finger wave. Some are even a mix of all and use their varying amount of fingers in order to change their bid, or let the auctioneer know what they want the opening bid to be. Some one finger waves appear to be nothing more than a tap on the arm, but they are still considered wavers.

The Greater Wavers are often confident bidders that know what they want and don’t care who else knows it. This often makes them easier to spot, though there are some Crafty Wavers that are exceptions to the rule.  These are also the most likely group to be seen suggesting to auctioneer to start the bidding lower with a energetic downward or circular wave. The Greater Waver along with the Header makes up the largest proportion of bidders in most marts.

These are an aging breed. However you can still find a few youngsters in parts of the country.
The Object Controllers aren’t confident in their body signals to get the bidding done and prefer to rely on an object to get the full message across. The most common objects used will be the good old farmers cap or the reliable herding stick.

The Hat Object Controller will tip or merely pop their cap in the direction of the auctioneer to place a bid.
The Stick Object Controller meanwhile will either raise their stick or occasionally, while hanging it into the ring, tap it off the wall of the ring.

Occasionally you could spot the truly rare hat/stick cross; those who lift their cap with their stick. The stick bidder is quite often very stressed at the start of the mart as the success of their visit will depend on getting a good spot by the ring that enables them to get the stick into position.

They are also a bidder to be wary of as they are very experienced and know exactly what an animal is worth. If you out bid them they won’t be happy as you will have paid too much and the next sellers up will be expecting the same. They will be disgusted.

So there you have it.
There are other types of bidder out there but they are too few to mention here. It is also common to see a mixed bidder who can use a mixture of any of the above.  This is just a short list to get you started. Once you’ve been to a few marts you will be able to pick out all the bidders around the ring in no time. So get back to the mart and see what bidders you can spot. Best of luck in your bidding endeavours no matter what type of bidder you choose to be. And remember it's all fun and games bidding, until you end up with a pile of animals to feed. Don’t become a bidding addict or you could find yourself with more animals than you need.

< Previous Post: Coccidiosis- What is it really?> Next Post: Keeping Surplus Lambs - Is it worth the Hassle?
Read Next