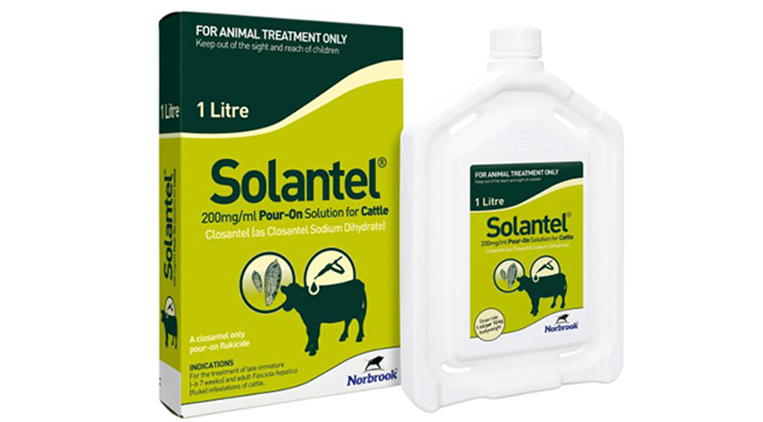 The right dose to use and when to use it. These are problems that trouble all sheep and cattle farmers at this time of year. Sheep, in particular, are so vulnerable to fluke that winter ewe deaths from fluke-related liver damage is commonly attested on Irish farms. It is almost impossible to prevent animals from contracting the parasite, especially if – like me – you have wet ground and have no option but to graze it. The lifecycle of this scourge of sheep farmers is very well understood and has been the subject of numerous studies. In short, fluke parasites that have been living on mud snails during the summer months migrate onto the long grass in early autumn, and from here pass into grazing livestock.

Since hitting the market in 2016, Norbrook’s Solantel drench has gained a great reputation among sheep farmers. A closantel-based drench, Solantel is usually used for treating immature and late immature fluke, naval bot fly and all adult stages of Haemonchus contortus. Over the last four years, we have used it to great effect on our farm in rotation with other closantel-based treatments. Even with the general increase in anthelminthic resistance observed on farms in recent years, Solantel has continued to work well for us. Typically, we administer a dose to our ewes in the early autumn, just before the ram goes in. The results speak for themselves. We haven’t had a serious fluke problem in several years, despite having some very wet pastureland.

The popularity of the Solantel sheep drench means that expectations are high for the new pour-on treatment for cattle. The Solantel Pour-On only hit the Irish market this year, so the jury is still out as to its success rate here. However, the early signs are positive and farmers looking to mix up their dosing regimes to combat anthelminthic resistance may find a pour-on treatment an attractive alternative to the more typical drench treatment. While it is true that cattle are not as vulnerable to fluke liver damage as sheep are, persistent fluke in cattle can also be fatal. At best, fluke will severely damage the animal’s health, prevent it from gaining body condition and reduce farm revenue.

The Solantel Pour-On for Cattle: What’s In It

The make-up of this new pour-on is broadly similar to the Solantel sheep drench. It, too, is a closantel-based treatment like Flukiver or Closamectin. This means that it is most effective at treating late immature fluke, but it also claims to be successful as a treatment for the adult parasite. The Solantel Pour-On is designed for a single administration only and should be administered topically at a rate of 20mg closantel per kg bodyweight.

As with other pour-ons, the Solantel formulation should be applied along the midline of the back in a narrow strip between the withers and the tail head. Assess bodyweight carefully prior to administration. The manufacturers insist that the timing of treatment with Solantel should be informed by epidemiological factors and should be customised for each individual farm. Norbrook also insists that farmers should avoid readministering for at least 10 weeks after the first administration. These are prudent guidelines for most treatments, but perhaps more so with pour-ons.

Let us know what you think

Have you tried the new Solantel Pour-On yet? If so, please share your thoughts in the comments section. Alternatively, you can drop us a message on Facebook or send us an email. Thanks for reading.

< Previous Post: Forecast: Wet With a Strong Chance of Fluke> Next Post: Livestock pneumonia: knowing the early signs is key
Read Next