What are the advantages of usingAllsure Cattle Boluses?

If an animal is insufficient in any of the trace elements present in Allsure Cattle Bolusesit can lead to problems such infertility and poor immune systems as well as other problems. All these problems caused by the lack of either copper, cobalt, iodine or selenium are listed below.  A single dose of Allsure Cattle Boluses will prevent deficiency of these elements.

​Iodine Deficiency: While low iodine levels can be quite common the effects that it can have vary greatly. The symptoms can include, reduced fertility, poor weight gain, reduced milk yield and quality, late abortions, stillbirth, perinatal mortality, metabolic disorders, Increased susceptibility to infectious diseases

Selenium Deficiency: Even though selenium is a common naturally occurring element it is frequently low in good quality pastures. Low intake of selenium can lead to white muscle disease, an increase in still births, depressed fertility and retained cleansing

Cobalt Deficiency: Cobalt is essential for the natural production of vitamin B12 in the rumen. Low levels of cobalt will lead to depressed appetite and general poor health.

What do Allsure Cattle Boluses Contain?

Stage 1: The bolus enters the first stomach and releases the rods stored within.

Stage 3:Acid in the 4th stomach dissolves the rods

Stage 4: The dissolved rods are passed through to the intestine where they are absorbed into the animals system

Always read label and all enclosed information before administering Allsure Boluses to animals!

Cattle Boluses
These types of wormers are administered orally using product-specific equipment.
Closely follow the manufacturer’s instructions to ensure that the boluses are delivered over the back of the tongue, so they can be swallowed.
Avoid any excess force, as this can cause damage to the throat and do not depress the plunger until you are satisfied with the positioning of the bolus.
It is important that the animal stays as calm as possible and can swallow.
It is very difficult to successfully and safely complete administration if the neck is twisted and the animal is fighting you.

Sheep Bolus
The administration technique is a vital part of ensuring that the bolus does its job effectively.
Make sure that the sheep are properly restrained and cannot leap around when they are being given the bolus so that they are able to swallow correctly.
Sheep can also suffer serious injury, or even death, if they are unrestrained and the gun penetrates the tissues at the back of the mouth.
Place a hand under the head and tilt slightly to the side.
Slot the nozzle in the gap between molar and incisor teeth and then over the back of the tongue.
If the operative just puts the bolus into the mouth, it may be rejected by the sheep. 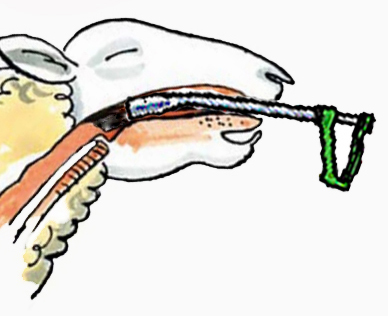 Due to Brexit we are temporarily unable to ship to the UK. Shipping to Northern Ireland will remain in place.

We’re sorry your purchase didn’t work out. But don’t worry; we have a great returns policy to help you out, plus returns are free.

All returns should be complete which includes boxes, manuals and accessories that may have been included with the order.

How do I return a product?

Making returns to us are free, simply follow the steps below and bring your package to an official DPD pickup point.

Once the returned product has been received into our warehouse and been fully inspected a refund will be issued.

For the return of bulk products please contact us at sales@agridirect.ie